Andy, an avid race car driver, first saw Courtney at the Albion track in early 2015. She was hard to miss. . . a short, cute blonde with large blue eyes and a big laugh. The moment passed much too quickly, and when the race was over, Andy was sure he had missed his chance. Months passed. But then, one fall day at a different track in Beatrice, he heard a familiar laugh. He turned to look and. . .sure enough, it was her. This time, Andy made certain that she didn't leave the track until he had her phone number. A few days later, he reached out to her and set up a first date in Lincoln, where Courtney was living. The attraction, it turned out, was mutual; Courtney liked Andy's smile and sense of humor. After a few dates, the couple knew they had something special, something that was sure to last.

They couldn't have been more right. One year later, Courtney and Andy were relaxing together on the sofa. It was just a few days after Christmas, and the two were enjoying the remnants of the holiday season. Suddenly, Andy took Courtney's hand and asked her if she would marry him. He knew she was the one he wanted to spend the rest of his life with. Her answer was a happy and tearful "yes."

The two selected October 27th, 2018 for their wedding at the United Methodist Church in Albion. When the event finally arrived, God blessed them with the perfect day. Even so late in the  season, vibrant fall leaves were all around, and temperatures were in the 60's. Courtney and Andy had chosen a sophisticated dark blue for the groomsmen, and a complimentary wine color for the bridesmaids. Courtney was stunning in her off-the-shoulder lace gown. In her hand, she held the most unique and pretty bouquet I've yet to photograph. Each amazing flower was made from wood, perfectly arranged.

Andy and Courtney ended the day at the Albion fairgrounds with a beautifully decorated reception. They had told me that their goal for their wedding was simply to blend two families into one and create a very special and memorable day. Having experienced their wedding with them, I can say they far exceeded their wish. It was a joy to capture their memories and be part of such an elegant affair for a lovely couple. 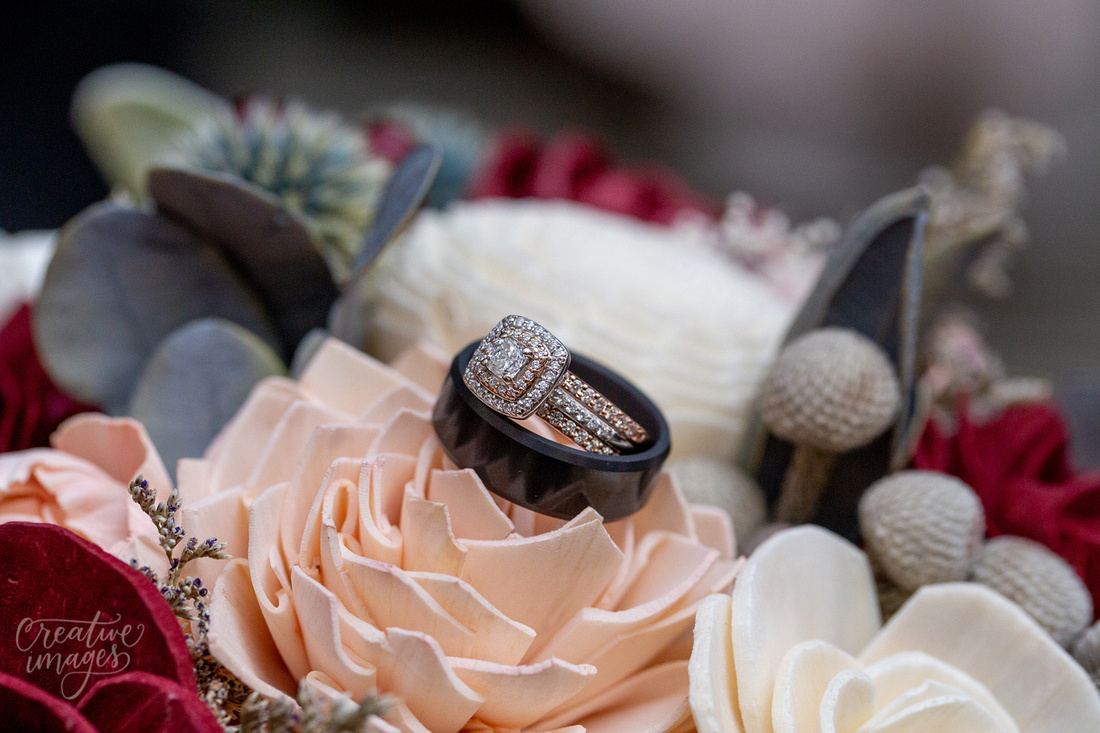 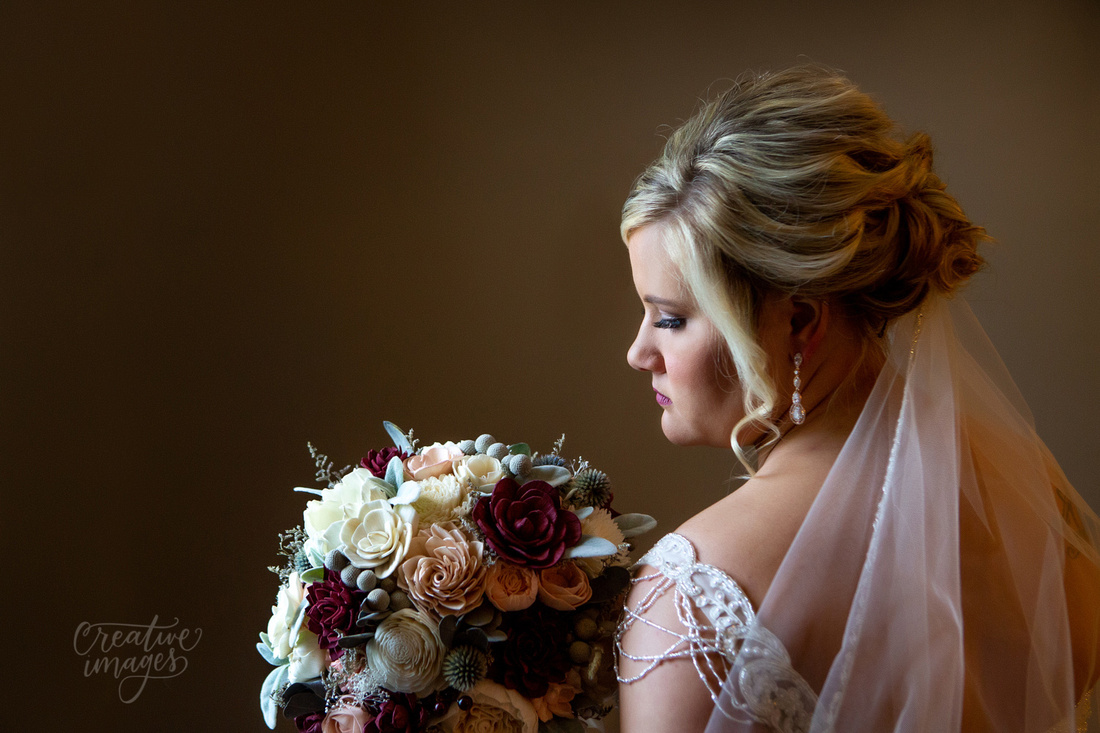 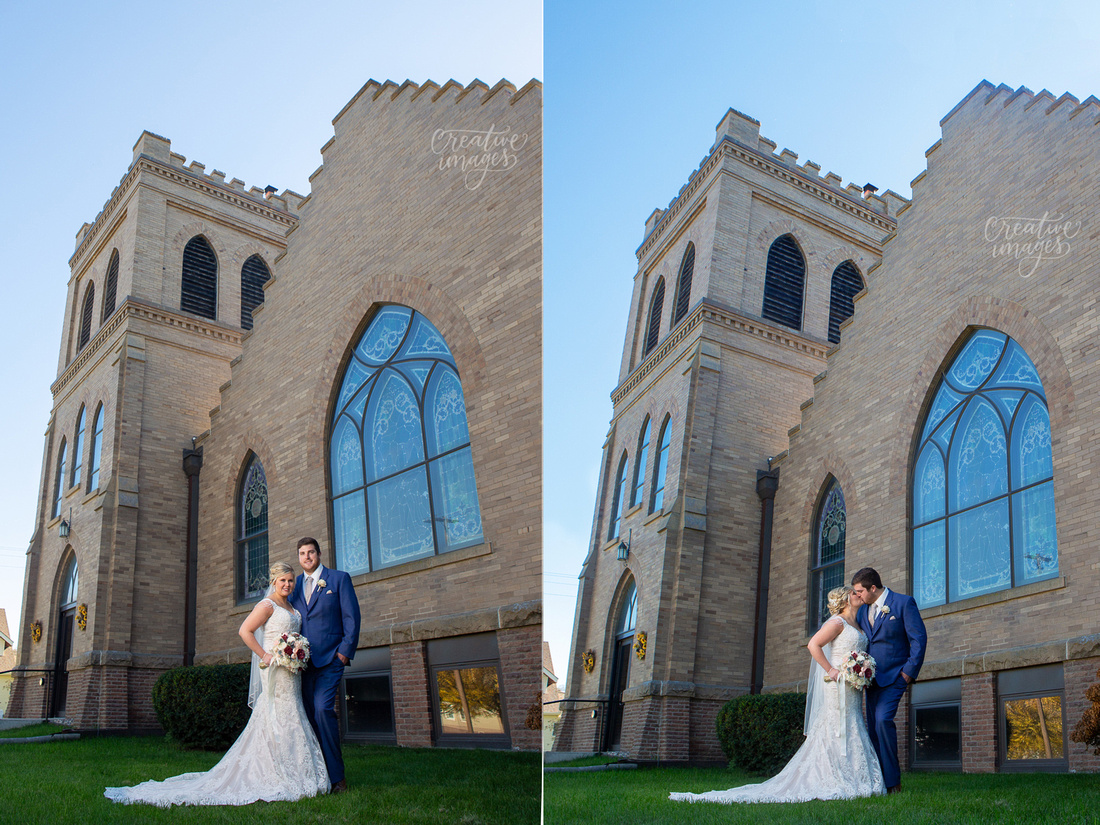 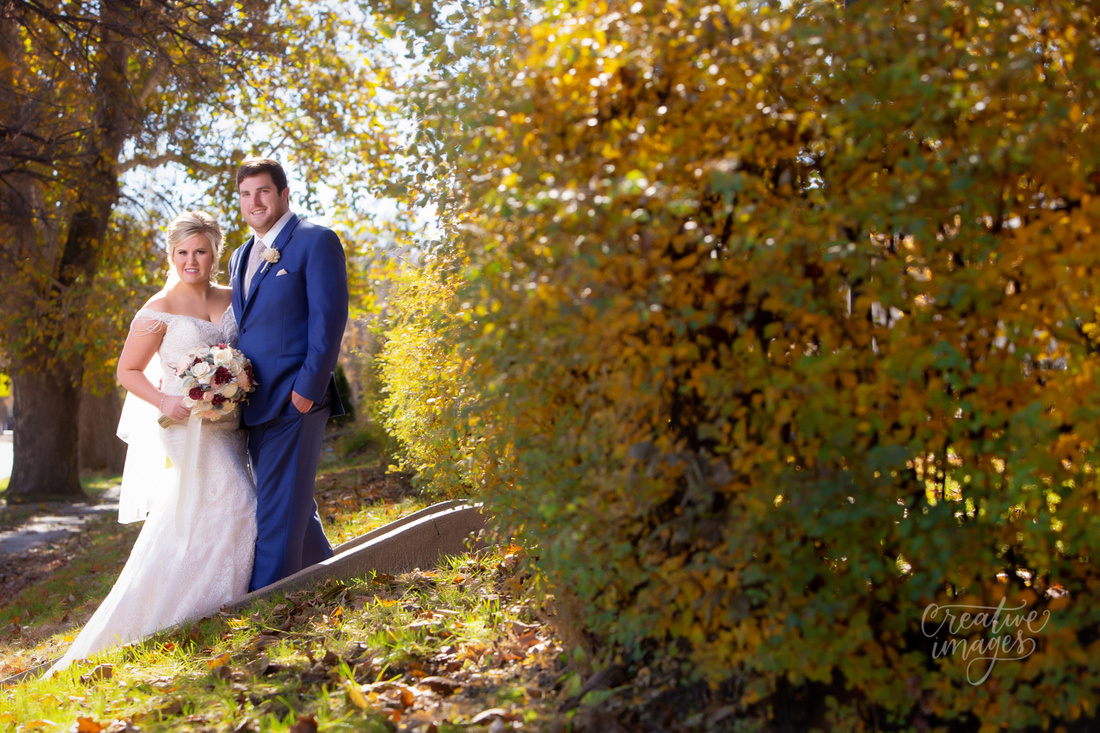 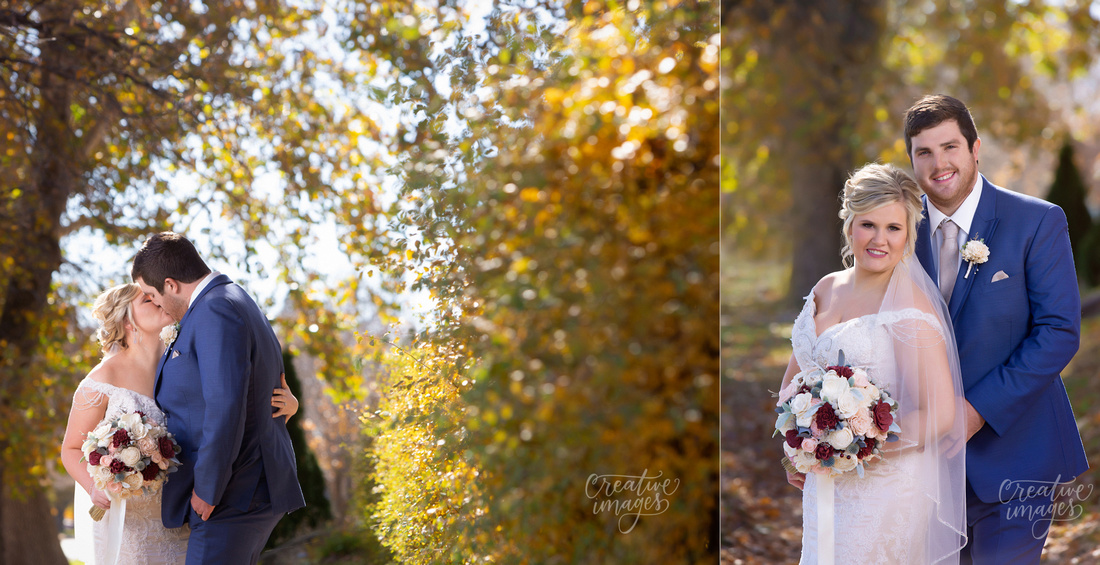 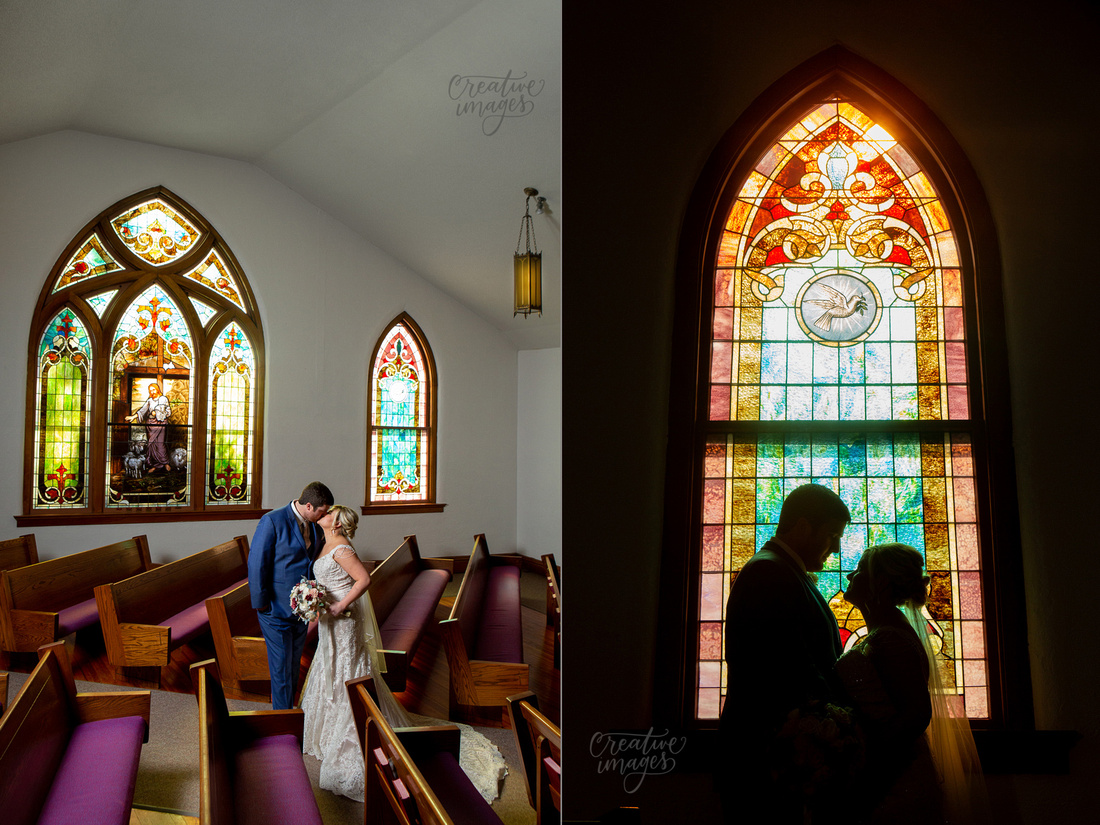 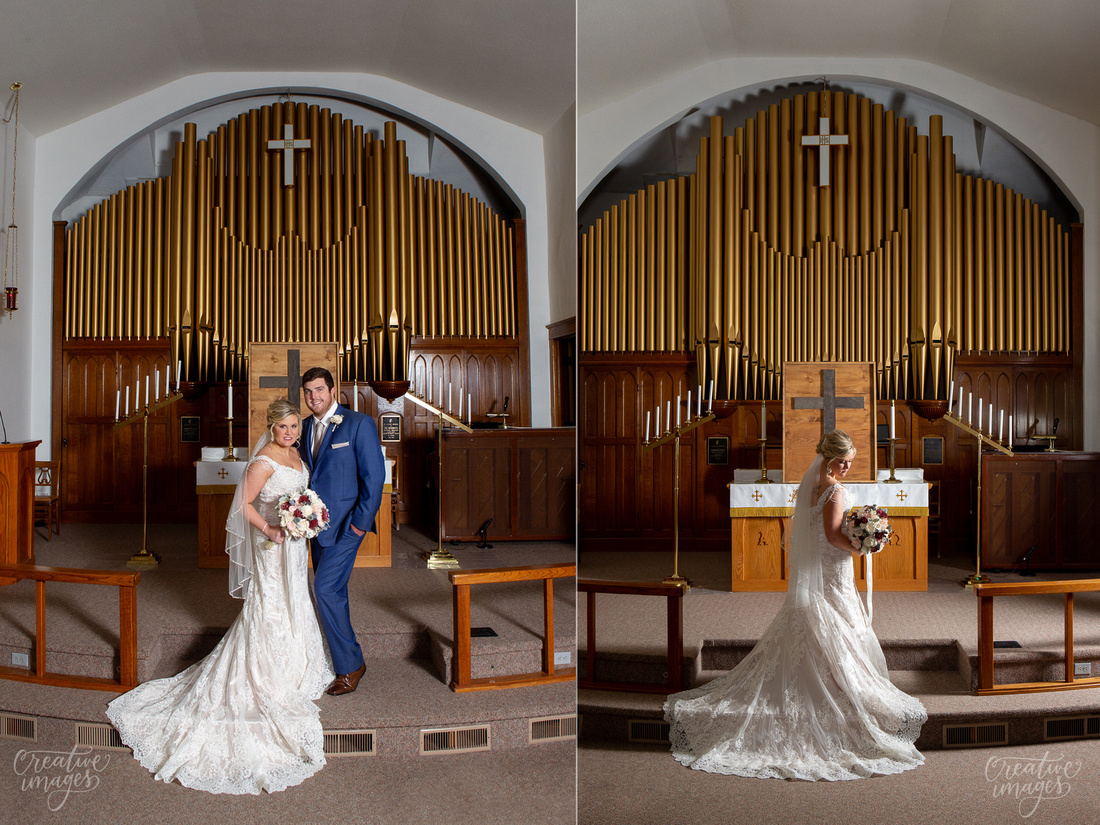