Sometimes a fleeting, chance encounter is all you get with a person. But other times there are second chances, like the one Keaton and Brooke had. The two grew up just 25 miles from each other, but they never met until one day at the Demo Derby in Platte Center. It was just a quick moment, however, and one which both barely remembered. One year later, though, on a sunny June day, the two met again, this time at the rodeo in in Clarkson. And this time, it wasn’t fleeting at all.

“I asked my friend who that tall blonde kid is, because he is cute!” Brooke recalled with laughter. Her friend was only too glad to introduce the two, and they exchanged SnapChat information. The next day, Brooke reached out to Keaton, asking if she had left her favorite koozie in his truck. “He laughed and said the only way I was ever going to get it back is if I went on a date with him!”

So the very next week, Keaton took Brooke to an Omaha restaurant, LaMesa. Afterwards, they met up with their two close friends, Patrick and Kayla, for a movie. Brooke got her koozie back, but she also gained something much more important that night - a steady boyfriend. From then on, Brooke and Keaton were best friends. They loved spending time together outdoors, going to rodeos, shooting guns, four-wheeling, or just hanging out with their family and friends.

But Keaton had more than friendship in mind, and two years later, he was ready with a special plan. He wanted the evening to take place where they had their first date, and he even arranged for it to be a double with the same friends, Patrick and Kayla. But it wouldn’t be entirely the same, for Keaton was hoping to leave the restaurant with a new fiancé.

When the two arrived at La Mesa, Brooke was in a hurry. She rushed inside to reach the restroom, leaving Keaton and their friends behind. Keaton tried to slow her down. “He yelled my name, but I was on a mission,” Brooke laughed. “Then he yelled it louder, and I flipped around and said ‘What?!’ ” Keaton was down on one knee holding out a ring. Completely shocked, Brooke just remembers continuing to ask if he was serious, before finally saying “Yes” to his important question.

Keaton and Brooke chose December 1st, 2018 for their wedding day. The first weekend in December for the past several years had been very nice, and Brooke loved the idea of having a beautiful winter theme. She wanted an elegant day, so she chose two classic colors, black and white, for her wedding party, and then included accents of copper in her flowers and decorations. All of the ladies had beautiful fur capes, and also a fun surprise that Brooke was excited about - each of the bridesmaid dresses and the wedding gown had pockets!

When the day arrived, Mother Nature didn’t cooperate. Instead of sunshine and warmth, there were blustery winds and snow. But there was also beauty and excitement that nothing could dampen. As the flakes floated down outside St. Isidore’s Catholic Church in Columbus, Brooke and Keaton exchanged vows, promising to love each other forever. That evening, they celebrated at The River’s Edge Convention Center with scores of family and friends that had turned out for the celebration. Every part of the reception was perfect, from the sparking chandeliers, white lights, copper mugs and chargers and, of course, custom designed koozies by Keaton and Brooke for all of their guests.

Taylor and I loved being a part of such a special and beautiful event and were honored to capture the love between the new Mr. and Mrs. Schmidt. We’re so glad they got a second meeting, and we wish them a lifetime of happiness and love. 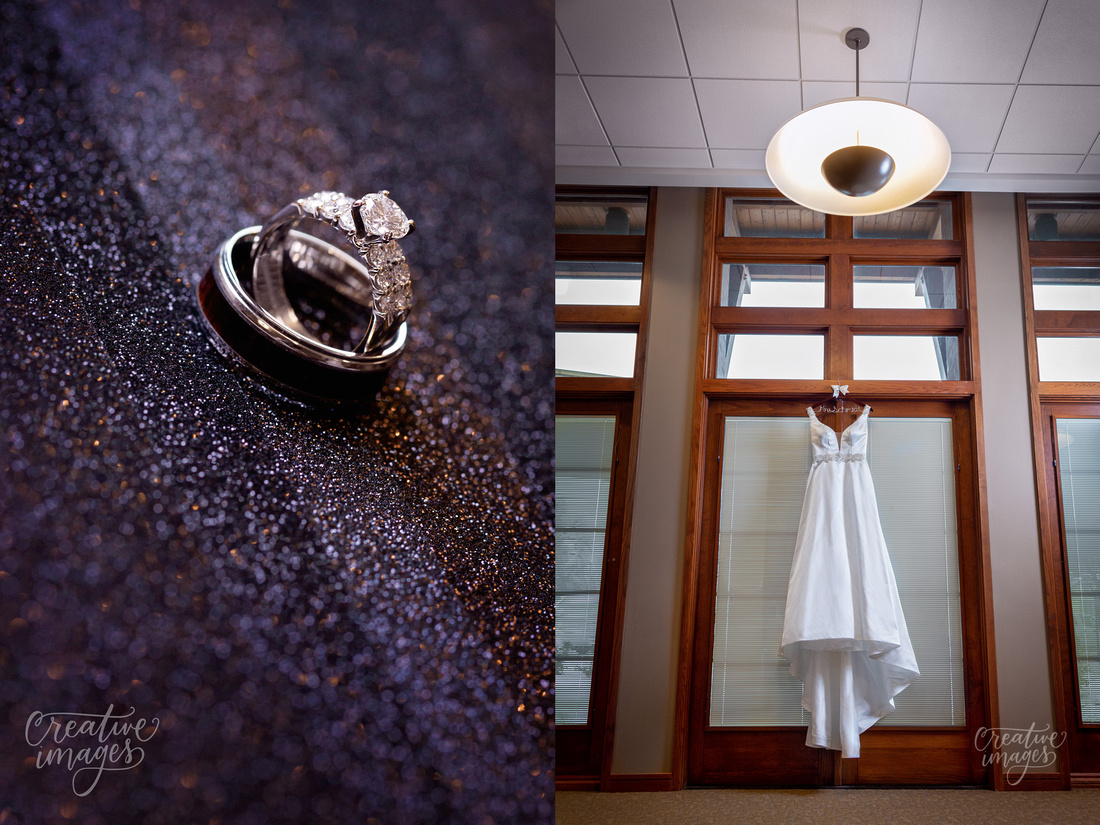 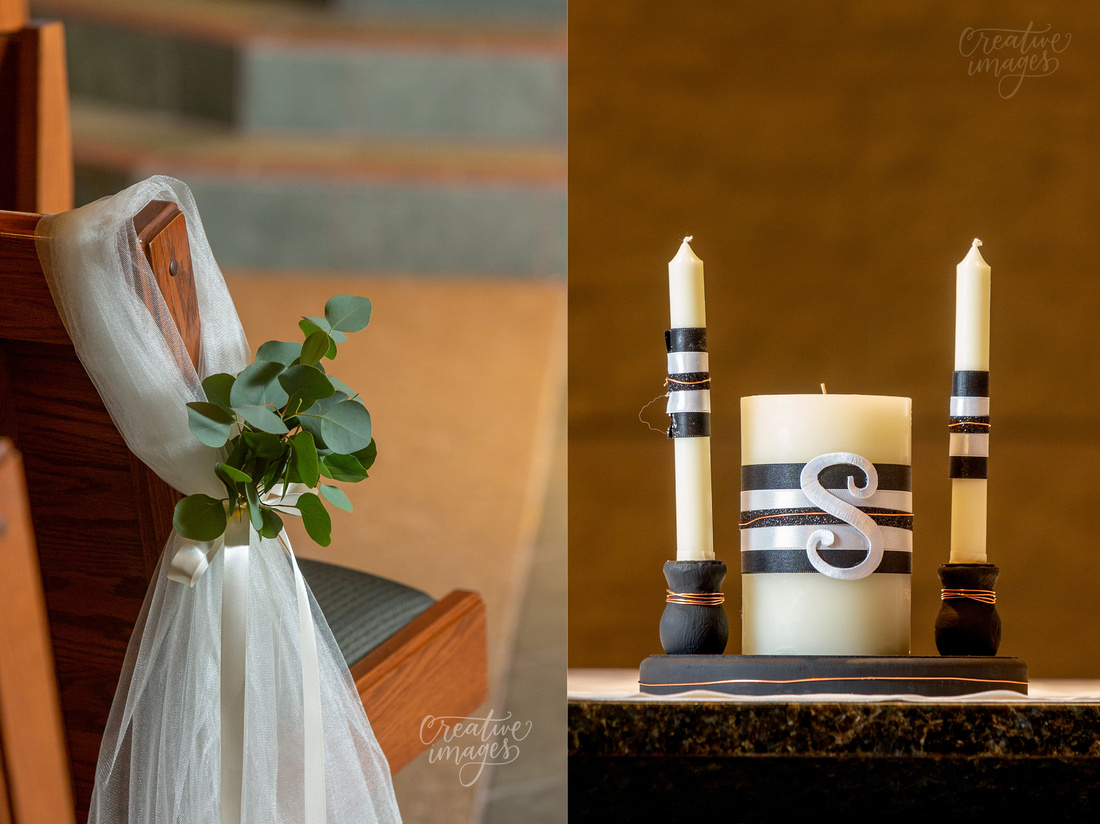 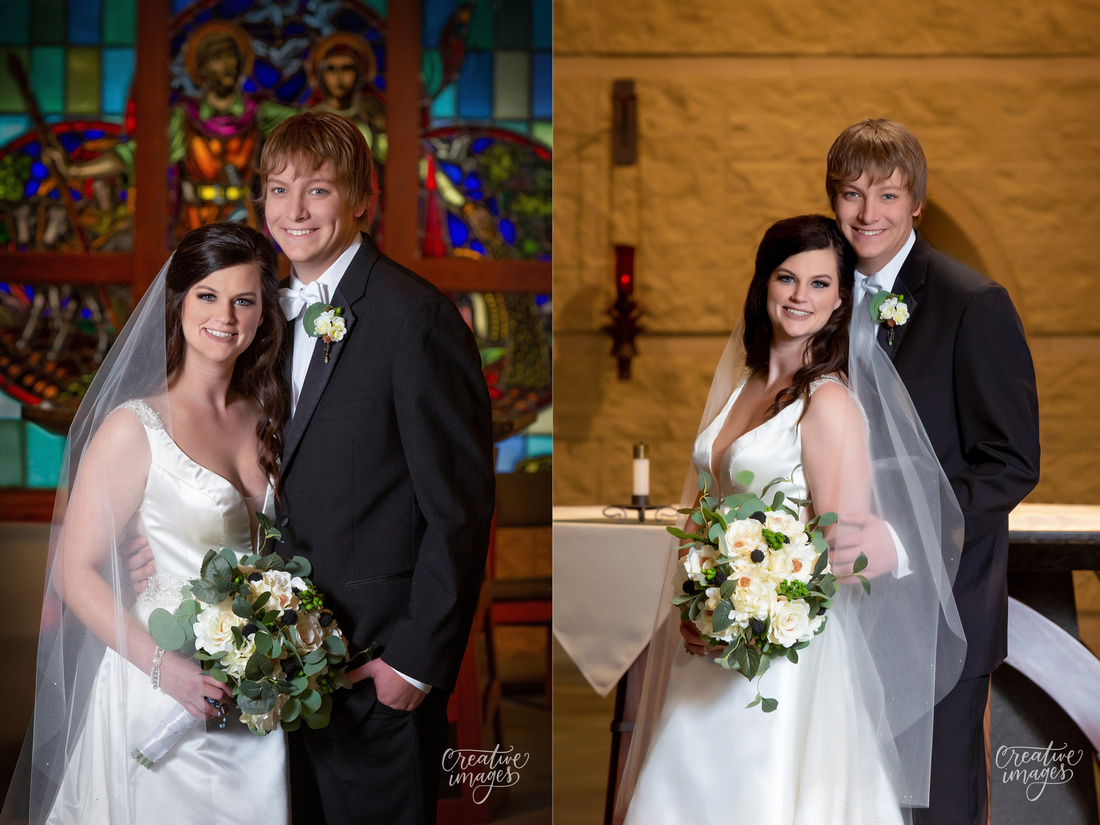 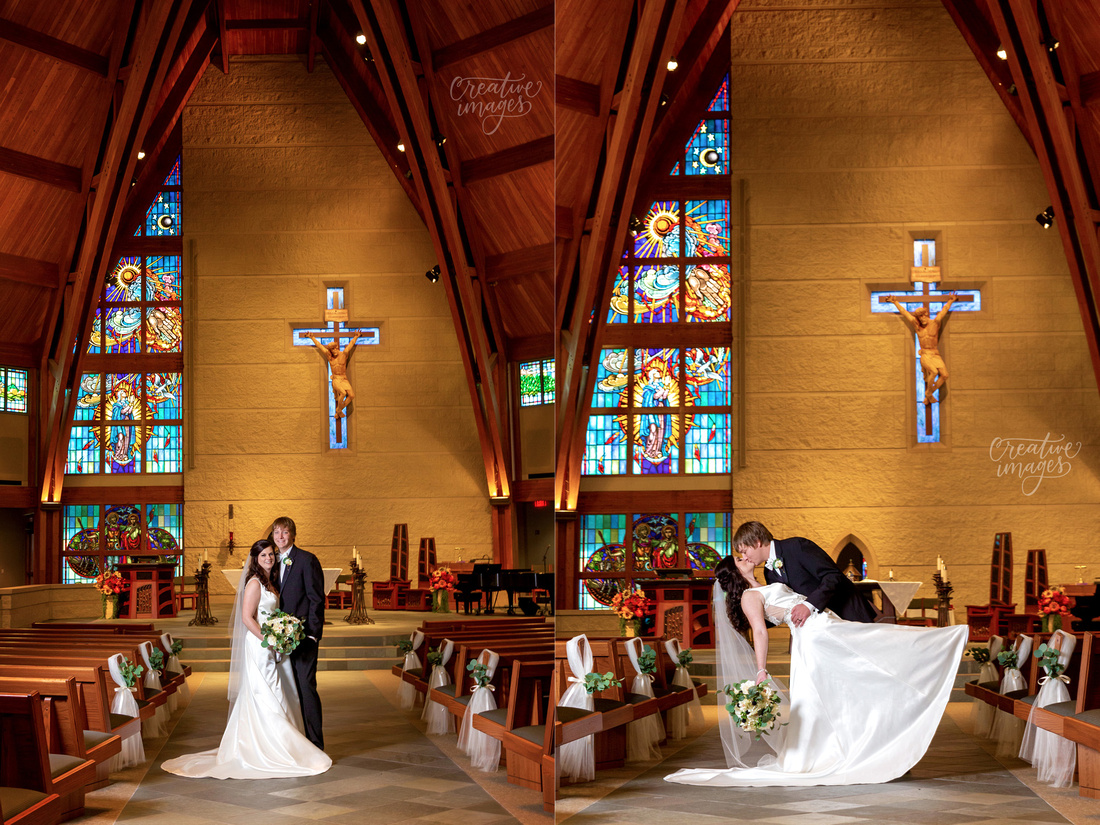 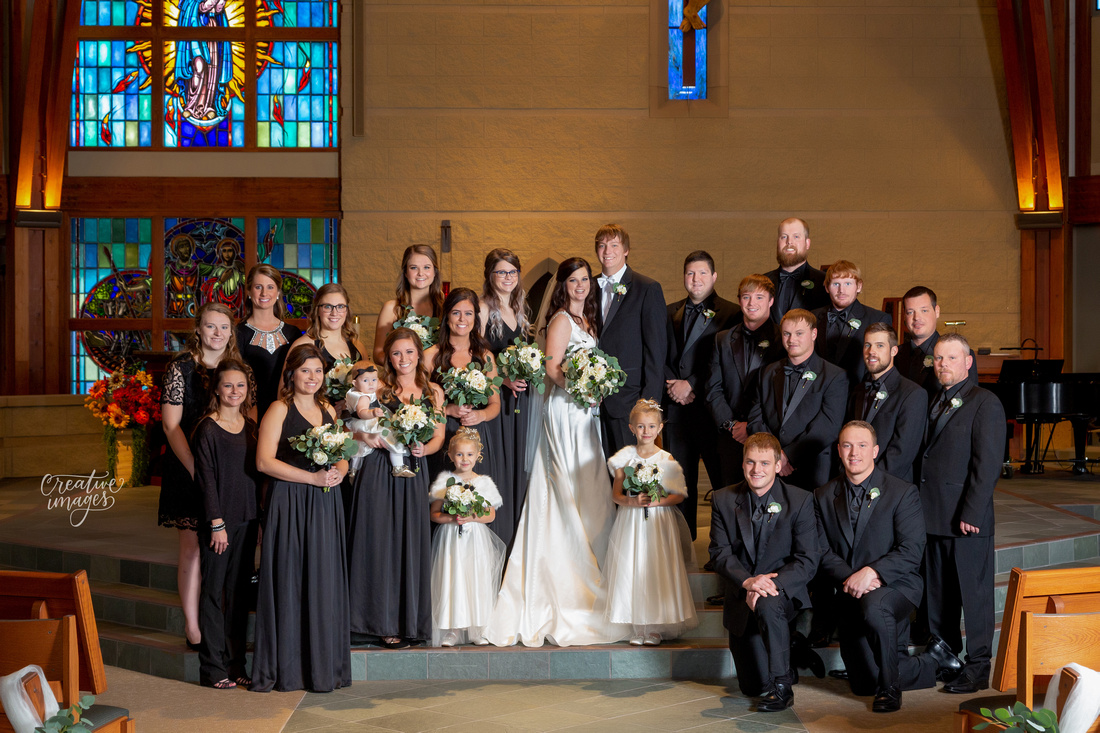 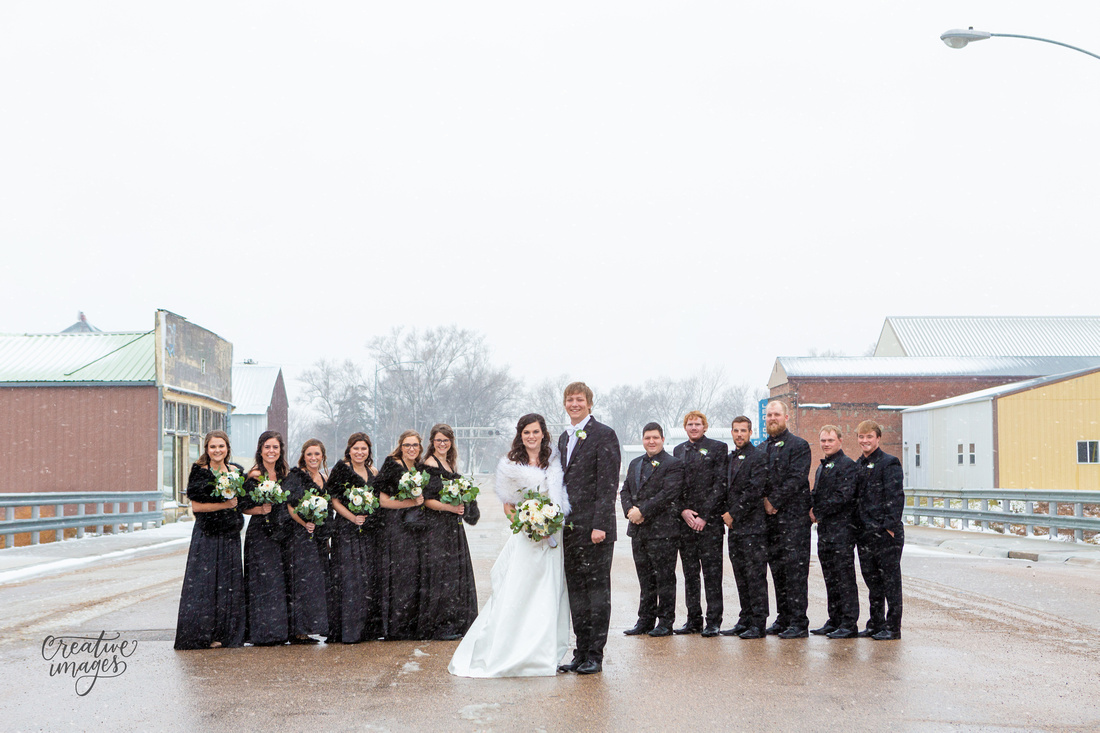